The life and times of Paddington Bear 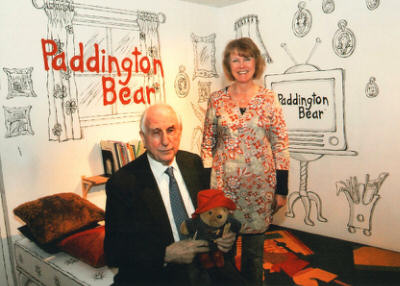 Cathy has co-curated this exhibition with Catherine Roberts at Reading Museum with invaluable help from Karen Jankel, Michael Bond’s daughter. She has also painted a mural for the exhibition depicting an Ivor Wood style room from the popular Paddington Bear television series, for the children’s reading corner.

The exhibition celebrates the famous bear from Darkest Peru and his creator, Michael Bond, who spent his childhood in Reading. It tells the story from the very first book A Bear Called Paddington, published in 1958, to the most recent title: Here and Now published in 2008, exactly fifty years later.

Michael Bond opened the exhibition and was entertained by a group of children from Katesgrove School in Reading, who read him one of his Paddington stories. Refreshments were of course provided and included Paddington's favourite sticky buns!